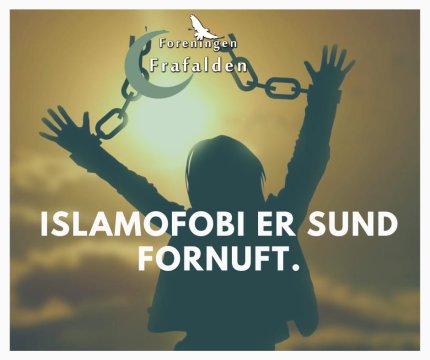 If Mustafa Musse Sayegh, founder and chairman of the Association Apostate, speaks to believers, then leaving Islam requires almost superhuman strength. He has done it himself - but he is also one of a kind. Therefore, a realistic future scenario is further segregation and parallel societies as long as we have Muslims in our midst.

If Mustafa Musse Sayegh, founder and chairman of Foreningen Frafalden (organization called ´Apostate´), has anything to say about Islamic believers, then it is that it requires almost superhuman strength to leave Islam. He has done it himself - but he is also stronger than most. Therefore, a realistic future scenario is further segregation, and parallel societies as long as we have Muslims in our midst.

"Islamophobia - it's common sense". The words are Mustafa Musse Sayeghs. He is chairman of the organization ´Apostate´, a "voluntary non-profit organization that wants to create networks and communities for ex-Muslims in Denmark", as stated on the association's website.

That wording could cover many different communities and networking groupings, but in this case, ´apostasy´ and ´ex-Muslims´ must be taken quite literally. Namely, it is Mustafa Sayegh's - or Musse as he is called - claim, that as a Muslim who wants to leave Islam, one can only do so by an active, open, and uncompromising break with the Religion of Peace. Not only that: a break with Islam presupposes a total showdown with, and rejection of the dogmas of Islam, for the break to be effective. And it has dire consequences for the individual, who not only has to wave goodbye to his/her entire previous set of values ​​and norms, and thus the basic notions of ´the good life´and how it should be lived, but also to family, friends and networks that never will accept such a choice.

To put it mildly, it is an extremely tough decision to make that requires more stamina and determination than most people can muster, because you thereby throw yourself into free fall. Nevertheless, it is Musse's clear conviction that this is what it takes if one wants to be free of Islam. For he speaks from experience, and has taken his own medicine: Mustafa Musse Sayegh was born in Lebanon in 1985, from where he came to Denmark the following year with his parents: first to Ribe, where he lived a long stretch of normal Danish life with school, Danish friends and leisure activities, but from the early teens also with a drive towards Islam and a Muslim identity. He was given ample opportunity to develop his Muslim identity when his parents moved him and his family to a Muslim ghetto area, where he inevitably developed into the prototype of young Muslim men we know so very well: an unfortunate mix of Islam and crime.

Until he broke with his petty criminal career and Islam.

Surprisingly, he himself cites Pia Kjærsgaard (Danish politician) as one of the main reasons for his confrontation with the life path that would inevitably have placed him on lifelong public support in the ghetto, and the local mosque, with occasional visits to the prison: Pia Kjærsgaard's insistence on drawing attention to the harmful effects of Islam on Danish society took root in him and he could not help but listen when she spoke. That Pia Kjærsgaard's words had that impact on him was probably also largely due to the fact that Musse in his early childhood in Ribe had tried to live as a normal Dane and got a taste for the freedom, the values ​​and the offers that Danish civil society offers.

Today he is divorced from his first (Muslim) wife and is now married to a Dane, has his own painting company, votes for Nye Borgerlige (a conservative party) and is, as I said, the founder and chairman of the Association called “Apostate”. He thunders against Islam on social media, and does not mince any words when it comes to well-meaning Danes of all political observations who are very much mistaken when they think that integration of Muslims is possible, and that social control and ditto coercion is only something that happens in particularly radicalized Muslim environments.

Musse has for a long time now grown into an almost one-man army, who fearlessly says the things openly that no one before him has dared to say for fear of reprisals from the Muslim community. He himself has put a quote from an interview in the newspaper Information as an introductory prayer to his Facebook profile: "When you grow up with Muslim ideas, it will undeniably collide with the freedom and freedom of speech we have in Denmark".

That fight Musse himself faces head on which can be witnessed by reading his posts on social media. On Facebook, he wrote on the 3rd of September: "The religious social control in Islam, keeps people in eternal denial and fear". And in a post the day before: “Muslims who want more Muslims to the country show ingratitude, and show where their loyalty lies. And it is not loyalty for Denmark. Their loyalty goes to Islam. "

As a pattern-breaker, and as a person, Mustafa Musse Sayegh is a bit of a revelation - in a double sense: his uncompromising attitude towards, and courageous outbursts against Islam, coupled with his willingness to uncompromisingly speak his mind, is liberating, well-placed and necessary, but at the same time unique. For he stands pretty much alone with his indomitable and almost death-defying critique of the Muslims living here, and it is very very obvious that only a few of his former fellow believers have the courage to follow his example. And that is precisely the flip side of the revelation: if we are to believe Musse when he says that it is necessary to do as he does if one wants to be free from Islam - then it will not happen for more than a few. Thus, we can finally wave goodbye to the hope that Muslims in Denmark will eventually become an active and contributing part of Danish society. It is never going to happen. As long as there are Muslims in Denmark, we will never again be the homogeneous society we once were.

The organization Frafalden (´Apostate`and ´Trykkefrihedsselskabet´(the Danish Free Press Society) will hold a joint debate meeting on the 23rd November in the Common Hall at the Danish Parliament Christiansborg with MP Peter Seier Christensen from Nye Borgerlige as host. Interested parties can follow and get information about the debate meeting on the associations' websites: www.frafalden.dk and www.trykkefrihed.dk