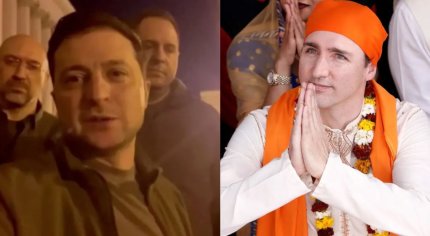 .Zelinsky and Trudeau have clowning as their common starting point, but where Trudeau really is a clown, Zelinsky has proven to be everything else.

Putin's vile attacks on and invasion of Ukraine have been the all dominating news in all the media, and if anything positive can be said at all about the wretched KGB-trash that is arbitrarily trying to seal Ukraine's fate, it is that he has united an otherwise increasingly frayed West in a unison condemnation and marked restrictions to hit Putin

Although it's hard to tear your eyes off the situation reports from Kiev and Lviv, and although the trucker rallys in Canada pale in comparison to what's going on in Ukraine, it oddly enough makes sense to compare Ukraine and Canada - or at least the leaders of the two countries - for on the surface they have several features in common and are at the same time as different as it is almost possible:

The Prime Minister of Canada Justin Trudeau and the President of Ukraine Volodomir Zelensky have acting, drama and comedy as common stepping stones - albeit in different ways:

Zelensky is admittedly a trained lawyer, but has had success with his own TV production company and not least the lead role in the comic TV series The Servant of the People, in which he plays a high school teacher who almost inadvertently becomes president. A role he came to repeat in reality when, as the total outsider in the 2019 presidential election, he won a landslide victory with 73% of the vote over incumbent President Poroshenko.

Justin Trudeau dropped out of both an engineering programme and a master´s degree in environmental geography, but he eventually managed to complete educations as a snowboard instructor and drama teacher. The latter education he constantly brings into play: Since becoming Canada's Prime Minister in 2015, he has repeatedly made a name for himself by transforming his duties as head of state into some kind of theatre - most infamous was when he during a visit to India dressed himself and his family in Bollywood costumes, allegedly in honor of the natives…

The expectations of the two men's stamina and ability as heads of state have given Trudeau the lead, but only on points he had not earned himself, but which he had gained by virtue of his father, Pierre Trudeau, who was Canada's Prime Minister back in the 1970s. However, during  Junior´s 4-year lead as head of state, Trudeau has already managed to stifle his inherited points: he thus has a number of political scandals behind him, such as when he authorized bigtech to impose censorship, but he is also known for his embarrassing incidents. One of the more spectacular was when in 2018, in his eagerness to prove how woke he is, he reprimanded a young woman for using the word “mankind”. According to Trudeau, the correct word was "peoplekind". A word that does not exist but which Trudeau invented for the occasion because it sounded more inclusive.

One could rightly say that both Zelensky and Trudeau have built their political careers on being clowns - albeit in their own way. They also have in common that 2022 became a year of political destiny for them and the year in which their leadership was to stand the test. And here the poor Canadians must blush with shame at who they have chosen to lead them:

When the trucker rally "Freedom Convoy 2022" reached Ottawa on January 22 and tens of thousands of Canadians took to the streets in a peaceful and festive (but also noisy) protest against Trudeau's corona sanctions, he was so intimidated that he fled out of Ottawa to a secret bunker. At a safe distance from the mean crowd, he raged against his countrymen on national television, calling the protesters racists and Nazis and accusing them of stealing food from homeless and threatening store owners. When he returned from his hiding place, he introduced a state of emergency, which made it possible to make arrests, seize property, force private companies to work for the state, and freeze deposits in bank accounts. All without a court order.

Unlike Trudeau, Zelinsky has proven to be anything but a clown: since Putin's invasion of Ukraine and declared goal of removing Zelinsky from power, Zelinsky has refused to be intimidated and to leave Kiev. He stands his ground alongside his countrymen and his response to the Americans who offered to evacuate him is already iconic: "I do not need a lift - I need weapons". In addition, his skilful use of social media and frequent videos of himself ready to fight in front of the government building in Kiev are undoubtedly crucial to the admirable resistance to the Russian invasion and willingness to fight for homeland and freedom that the Ukrainians have mustered.

In less than a week, Zelinsky has become a kind of global hero and a mindset of how a head of state should act. His starting point as a comedian and his lack of political experience is a reminder that it is not what you are, but who you are that counts.

This also applies to Trudeau.