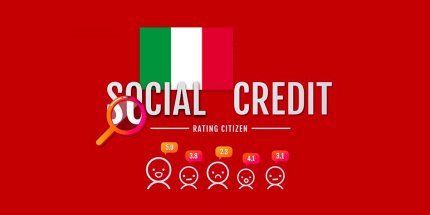 As part of the efforts to live up to United Nations Sustainable Development Goals (SDG) citizens of Rome and Bologna are now offered an app rewarding them for good behaviour. This, for a beginning, translates into sorting of garbage, use of public transport, reduced consumption of energy – and no fines!
Movements and activities of citizens is increasingly being registered and what starts out in good intension of supporting sustainable development risks to evolve into a social credit system as known from China.

Smart Citizen Wallet
Smart Citizen Wallet was introduced at a press conference March 29 on digital innovation in Bologna. Mayor Metteo Lepore explained the project together with Massimo Bugani, who is director of the ‘Digital Agenda’ of Bologna. Bugani explained: “We will start up a pioneering project for the city this September, focused on the model citizen: a citizen, who e.g. sorts the garbage, avoids using unnecessary high amounts of energy, uses public transport and actively uses the Welcome Card of Bologna – and gets no fines. The municipality will give a certain number of points as part of a system of awards, which in turn will give economical benefits to the individual citizen.” Bugani compared this project to installing a completely new system of water supply. “In the years to come many services will be digitalized in Italy; what we present is an ambitious project build on a solid foundation.” He emphasized, that it will become optional to participate. “Those, who wish, will have an opportunity to consent, when downloading and using this app.”

Critique of the Bologna project
The Italian IT-company Privacy Networks, specializing in the area of digital protection of private citizens, warns of the juridical, ethical and social implications of introducing an app like Smart Citizen Wallet: “If these procedures are poorly developed or applied they can result in serious limitations and violations of the rights and liberties of individual citizens, as well as discriminating procedures which are possible by technological means too, like ‘social credit systems’ (or: social grading).

According to Privacy Networks these systems of evaluation must belong to the category of ‘High Risk Applications’ as defined in the EU regulation on harmonizing regulation of artificial intelligence. Privacy Networks is furthermore concerned about similar systems already being introduced in other Italian cities, among them Rome.

Privacy Networks is therefore seeking access to documents for further clarification of the project: how are the personal data handled? Which methods of artificial intelligence or automatization are applied? Which suppliers or third parties are involved in the implementation of this project?

Regulating the citizens’ energy consumption
Rewarding model citizens with discounts and cultural special offers may be all very well, but which punishments will the system impose on the ‘bad citizens’? Will they be cut off from using air-conditioning in the hot months of summer? Or from water in periods of drought? Or be freezing in particularly cold months of winter?

It can be all good intentions on the part of authorities to aspire to live up to the Sustainable Development Goals of United Nations, just as, presently, to seek to reduce energy supplies from Russia. It can, however, turn out to be a serious interference with the civic rights of individual citizens to try to accomplish this by a system of social credits.

The digital Society of Surveillance
This system of social credits in Italy is introduced as an optional offer, while tempting with discounts and special cultural offers. Some might be lured by the economical incentive. It remains to be seen how the system develops: if sceptics are right about fearing a movement towards the social credit system of China. China is leading in artificial intelligence and surveillance.

Increased digitalization on the part of authorities challenges protection of digital privacy. In Denmark, law requires telecommunication companies to store information on the moves of their customers for one year. This enables authorities to identify telecommunication partners (phone calls and sms) combined with the physical location of their customers through their extensive logging data. This access is provided under the pretext, that logging data are an important source of intelligence.

In December 2021, the Danish parliament passed a law allowing tax authorities to use artificial intelligence in collecting and linking data from all public authorities and publicly accessible sources (e.g. social media) in an effort to avoid tax evasion. Danish citizens as well as business companies can “based on a statistically calculated risk potentially be subject to various measures, like being spot checked, merely due to their profile resembling a type of citizen or company typically committing mistakes or fraud.” The Danish Agency of Data Ethics expresses concern that exertion of authority increasingly should be based on broad collection of data and algorithms.

Use of identification applications is increasing. Austria, as an example, will this coming summer introduce a digital citizens ID through the app IDAustria and the EU will, autumn 2023, implement an app “European Digital Identity Wallet”.

Authorities are thus given increased access to obtain detailed information on citizens.