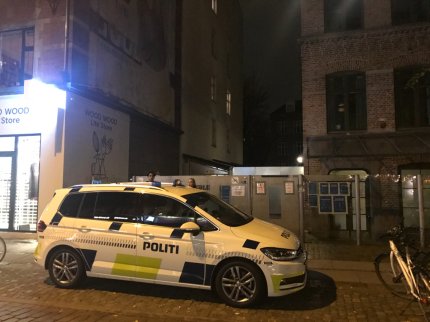 It has never been part of a free and open democracy that its citizens cannot move freely and that certain sections of the population must be protected from the violent attacks of other groups, and that central institutions must be guarded. It has never been a viable recipe for a well-functioning democracy

Last evening when I walked through Værnedamsvej I took a photo of the police car parked in front of the French School: Lycée Francais Prince Henrik.  Since a Muslim beheaded French schoolteacher Samuel Paty on an open street on October 16, and another Muslim on October 29 killed three people and cut the throat of one (a woman) in a church in Nice, the Danish authorities have found it necessary to police protect the school, its students and its staff.

The day before, I had been visiting friends in Ole Suhrsgade, where, as usual, I passed the police car that is permanently parked in front of the synagogue…the police car which has long since become an integral part of the street scene in the short street that connects Øster Farimagsgade with Øster Søgade. I know though that the Police car is only the visible part of the far-reaching police security measures that surround the small synagogue.

Add to this the massive military and police presence guarding of the synagogue in Krystalgade and the Jewish Elementary School, Carolineskolen - and the countless concrete bollards (terror prevention) in all shapes and sizes scattered on streets and alleys and around buildings that house central authorities. Not to mention the extensive and effective protection that the police maintain for the newspaper Jyllands-Posten, and the cartoonist Kurt Westergaard. All in an attempt to shield the citizens from the attacks that are expected to come.

Every time an Islamic terrorist attack strikes in France, England or Germany, the protection measures in Denmark, in the heart of our society, are further intensified and expanded. Most recently with the guarding of the French School. The urgent measures have long been a daily reminder to all Copenhageners that they are in danger, and that their safety is threatened, but that the state is doing what it can to protect us.

And yet not, because it has never been part of a free and open democracy that its citizens cannot move freely and that certain sections of the population must be protected from the violent attacks of other groups, and that central institutions must be guarded. It has never been a viable recipe for a well-functioning democracy - and it is at once thought provoking and disturbing that no one seems to be asking the key questions: How many times can we extend the protection / guarding of ever more threatened groups and authorities, and still call us a free and open democracy? Is there a limit to how militarized and guarded civil society can be and still call itself a democracy? And above all: what is the strategy of the government, the Folketing (Danish parliament) and the authorities in the future? Will we continue to spend even more (necessary) resources on protecting new terrorist targets at the expense of (equally necessary) resources to maintain law and order in the rest of society?

These are very relevant questions that are becoming increasingly urgent and that we need answers to. Not least because the threat picture is unique and has only one addressee: Islam. If Islam did not exist in Denmark, Danish Jews, employees at Jyllands-Posten, teachers and students in French schools, satirists, critics of Islam, bourgeois politicians and all the others who will soon be the next to have protection, could move and live freely.

It is thought provoking.