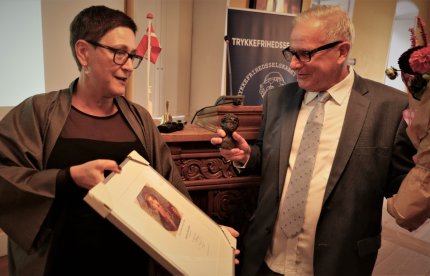 "With your quiet perseverance and insistence on spreading awareness of developments in Sweden, you have just shown the fearlessness and uncompromisingness that makes you an obvious recipient of the Sapphop Prize, and we look forward to presenting you with the award today..."

"Gunnar Sandelin has been a bit of a hero throughout, and it has cost him dearly."

The sentence appears in the middle of an email to me from Steen Raaschou in the early summer of 2018. I had written to him and asked if he had any suggestions for an expert on the ongoing developments in Sweden as to who could sit on the panel for our upcoming conference that we had given it rather ominous title "Is Sweden Lost?". We already had two panel members, namely the Swedish journalist Jan Sjunneson and the Danish historian Mikael Jalving - but we could use another voice in the debate.

We had heard about Gunnar Sandelin and his work, but it was Steen's brief recommendation that made both me, and the rest of the board, immediately decide to get him to the conference here in Vartov.

Thank God it turned out to be easy: Sandelin said yes immediately, and in the weeks leading up to the conference that took place in this room almost exactly two years ago, it dawned on us how seriously he took the invitation, and with what thoroughness, he went to the task: his speech to the conference was based on a huge amount of slides, packed with numbers, graphs and bar charts that he sent to us. But not only that: we even got several updates and corrections, so we eventually got nervous about whether it was the right version that was on the PC.

The conference was what can be described as a dystopian success - not least thanks to Gunnar Sandelin's extensive documentation of the discouraging analysis from the panel, which painted a picture of Sweden as a country that finds itself, in an irreversible social, economic and cultural deroute.

What made Sandelin's post and analysis even more startling and eerie however, was that his documentation is essentially based on publicly available figures, which are freely available on the Swedish authorities' own websites.

It strengthens at once the validity of Gunnar Sandelin's work, and at the same time, makes one shudder - for how in the world can the Swedish state publish such an overwhelming number of pieces of evidence that Sweden is abolishing itself as a nation state and welfare society - without taking their own numbers seriously?

Why is it only Gunnar Sandelin who collects these numbers and draws a clear picture of the situation?

Why has Gunnar Sandelin's analysis, which in all its sobriety is an irrefutable proof of Sweden's imminent collapse, not resonated in all Swedish media?

And why has Gunnar Sandelin not been celebrated and honored in his homeland, instead of being, on the contrary, shamed and banned from employment for his patriotic work?

A significant part of the answer can likely be found in the Swedes' towering trust in the state, and the special Swedish need to be number one in the class - not least when it comes to being charitable and inclusive. A need that has made Swedish politicians' mission to turn Sweden into a humanitarian superpower an inviolable dogma. In Swedish self-understanding, there is no room for realists and skeptics who question the appropriateness of undermining the social, economic and cultural foundation that has made Sweden a welfare, and rule of law, success - basically because it wants to be a humanitarian superpower.

If you disagree with this established ethos, you are considered a dissident, and in Sweden dissidents are shamed, their messages are silenced, and they are deprived of the opportunity to make a career.

As in the case of Gunnar Sandelin.

Gunnar Sandelin's career ran smoothly until in 2008 where he wrote a critical debate article in Dagens Nyheter that the journalistic community consistently obscures the truth about the negative consequences of immigration for Swedish society.

That one article ruined his career and opportunities to get a job as a journalist again in one fell swoop:

The state-sponsored media shouted at him as being "xenophobic", his journalistic duties dried up, and his former collaborators withdrew from working with him for fear that his new predicate as a kind of enemy of the people, would infect them.

In practice, the article in Dagens Nyheter meant that Gunnar Sandelin was banned from working by the Swedish mainstream media for writing the truth, and this made it impossible for him to get a job - not just as a journalist, but in general.

And here we are back to Steen Raaschou's little sentence in the e-mail from 2018, which caught our eye: "Gunnar Sandelin has been a bit of a hero all through, and it has cost him dearly".

Yes, Gunnar: it has cost you dearly to tell the truth - but still you have continued: "Never, never, never ask if it is useful, just if it is true!" said the pastor Kaj Munk. I do not know if you know the quote, but you have made Kaj Munk's words yours, and relentlessly continue your important work, despite great opposition.

The Sapphop Prize is given to a person who has shown fearlessness and uncompromisingness in the fight for free speech.

With your quiet perseverance and insistence on spreading awareness of developments in Sweden, you have just shown the fearlessness and uncompromisingness that makes you an obvious recipient of the Sapphop Prize, and we look forward to presenting you with the award today. It is in itself a small sign that it matters (to speak the truth).”

Congratulations on the award.