...who are these "somebodies" who, based on political motives, and on the basis of subjective reluctance now sit and have the power to decide on tech giants’ censorship policy? Who and what groups have now been given the political power to autocratically restrict the democratic public and the content of the political debate on social media?

Tommy Robinson's visit on the occasion of the Sappho award ceremony in Copenhagen gave rise to some terrifying revelations of degeneration in our democratic public: Facebooks’ undemocratic censorship policy, the use of falsehood and manipulation as a method in multiple mainstream media (Deadline and Berlingske Tidende) - and the increasing use of arbitrary and politically motivated censorship practiced by the almost monopoly-like and autocratic social media: Youtube.

Thus, not only did Robinson's media criticism of the Fourth State Power and video disclosure of 'Deadline' journalist Steen Nørskov become deleted by Youtube censorship: https://www.trykkefrihed.dk/i-ytringsfrihedens-navn.htm,

…also his acceptance given at the Sappho Awards ceremony was censored by Youtube,

…although there was nothing in the content of the speech content that in any way could be claimed to exceed the limits of factual, democratic debate. This is purely an autocratic and biased media exercising its power and undemocratic censorship policies on the basis of subjective and political dislike.

In October 2019 Kit Louise Strand wrote here for the Free Press Society about how Youtube increasingly exercised politically motivated censorship, and noted how Youtube's censorship, among other things, ludicrously affected teaching videos from Prager University, who responded with a so far futile attempt to obtain freedom of expression on social media through a lawsuit against Youtube in America: https://www.trykkefrihed.dk/prager-university-vs.-youtube.htm "There is absolutely nothing 'inappropriate' about the content of the PragerU videos that Google and Youtube have censored ”, then Prager Us Director Marissa Streit stated and concluded; "... It is clear, that someone does not like what we teach, and intends to prevent us from teaching that. Can you imagine what the world would look like if Google and Youtube were just allowed to continue their random censorship of ideas that they simply do not agree with? " But who are these "somebodies" who, based on political motives, and on the basis of subjective reluctance now sit and have the power to decide on tech giants’ censorship policy? Who and what groups have now been given the political power to autocratically restrict the democratic public and the content of the political debate on social media?

In the article “What is the limit for the content on Youtube”? (12.02. 2020) in Berlingske, Youtube's European boss; Cecile Frot-Coutaz admits that Youtube is increasingly exercising censorship, not only against terrorists, violent and sexually offensive content, but also against "videos, that ", as she says" ... lie on the border "". The critical question of who and what criteria should define this "boundary", of course, was not asked by Berlingske's journalist, but the article states that YouTube's censorship policy is increasingly being exercised politically, and in collaboration with secret groups in the background, which in practice determine social media censorship policy: “We cooperate with - I think - two hundred expert groups, ”Frot-Coutaz says, but does not tell more specifically about who these “expert groups” are and what objective criteria they are working from? And nor was she asked about this by Berlingske's journalist.

So here we have a new undemocratic ante-chamber, which, without popular mandate, are exercising a rising political censorship against growing sections of the democratic public. We are not permitted to know who they are, and what criteria they work from, so in practice, it is up to them to decide over large parts of the political debate. A huge democratic problem that our mainstream media and politicians do not at all understand the extent of.

A Guardian Council which, on the basis of political and subjective motives, limits liberties and democratic debate.

The question of which moral and political qualifications might justify these "Expert groups" to exercise this arbitrary political censorship is, in the interview with the Commissioner also not asked by Berlingske's journalist.

In the Free Press Society’s interview with Tommy Robinson, who has not yet been censored Youtube, but probably soon it will be and who thereafter will be available on free media like Bitchute and 3Speak, Robinson invites our politicians in Parliament to convene Facebook and Youtubes commissioners for a critical hearing in which they are held accountable for their undemocratic censorship policies. But - we know that is not going to happen. Facebook and Youtube censorship affects neither the left nor the bourgeois politicians, so they probably don't care, or worse yet, rejoice in their quiet mind over this restriction of the democratic public.

Therefore, in the short term, the solution must be a democratic migration towards alternative media platforms. 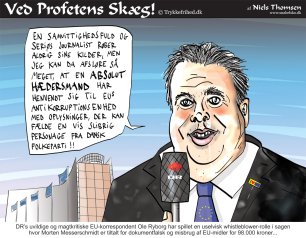