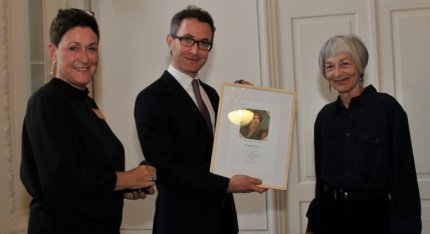 Douglas Murray receives the Sappho Award because he has done his homework  so brilliantly and stood up staunchly for his position in the debate.
Your books, your articles, and your public appearances demonstrate the importance of truth - therefore, in the perspective of free speech, you are an inspiring example to follow.

Good afternoon Ladies and Gentlemen – good afternoon Mr. Douglas Murray.
It is a great honour for the Free Press Society – and for Denmark – that you are here today. It is hard to find a person who fulfills the mission statement of The Free Press Society better than you. You have demonstrated great initiative and talent for the hard journalistic digging work on a high international level. Fearlessly, layer by layer, you have uncovered the harsh facts and led your readers towards the outlines of the possibility of a better world. In a constant struggle with the main stream media that much too often don’t want to listen to and communicate the facts you present them with.

You are a true defender of free speech which you have demonstrated on numerous occasions. Your brilliant contributions to the analysis of the Charlie Hebdo-attack on several television channels is one example. Carefully balanced between passionate and cool. Your unbiased contribution to the discussion with Sam Harris on Stefan Molyneux and Jared Taylor another example. In which you are opposing the guilty-by-association tactic – in favour of free speech.

I is also a great honour for me personally that I have been given the opportunity to present this year’s Sappho Award.  As most people present know - the idea of the Sappho Award is to pay tribute to a person who has used his - or her - right to free speech. Where ever it’s threatened. And where ever the truth has difficulty in getting through to the public. Often at great personal costs because the speaker has dealt with and commented on controversial issues.

I don’t know how extensive the personal costs have been for you, Douglas Murray, but I do know that over the years you’ve had to put up with quite a lot in the public debate – for everyone to follow at YouTube.

Most people in the audience know you and your significant work. But, for those who might not – just a few words about your career.

You are a journalist and political commentator – and you are the founder of the Centre for Social Cohesion. Furthermore you are the associate director of the Henry Jackson Society and associate editor of the British magazine “The Spectator”.  You appear regularly in the British broadcast media, where you comment on issues such as free speech, immigration, and gay rights - mind you, from a conservative standpoint. And you are a firm and steady critic of islam, one of those UN-happy few actually knowing what they are talking about.
Last, but not least you are the author of some very important books, the latest one being “The Strange Death of Europe. Immigration, Identity, Islam”. A wake-up call for every single Westerner and supporter of Western democracies and the Western civilization. The value of your book is reflected in the fact that published in 2017 it has already been translated into several languages and now – fortunately – into Danish. Hail to your Danish publisher and translator Jens Ellekær. No hail to the Danish mainstream media which have been remarkably reluctant to pay attention to your book.

Your voice - along with Jordan B. Peterson’s – has gradually become more and more important in the debate about Europe’s survival. In this struggle you have certainly established yourself as a man deserving deep respect – and admiration. The cliché: A torch in these darkening ages – in your case is no exaggeration.

Back to YouTube, which has turned out to be an excellent source to learn from your elegant debating style. I watch you all the time and always enjoy heartily listening to and learning from your arguments. Which reveal your deep knowledge, your extensive reading, your composure, your wit, your charm and your sense of humour.

Your ironical understatements are always a rhetorical delight. Without, however, yielding to empty rhetoric - always with substance and factual evidence.

Just one example of your style - picked randomly from a speech delivered during the David Horowitz’s Restoration Weekend 2017 – concerning the lies in the immigration debate: For instance the lie about migrants being an economic gain for their society and that immigrants would enrich society:

“Once, once  you go over that lie you get to another one - which the German people and others were told which is that we  are an aging population, we are a graying population, and therefore we need obviously to bring people in to keep us and our society into the standards to which we have become accustomed – of course this argument always ignores one extraordinary thing which none of the politicians ever seem to be able to recognize which is the startling fact that migrants get old as well –  it’s amazingly enough it’s not just us Europeans who suffer the aging process – who knew.”  (https://www.youtube.com/watch?v=wrf95Yl0UJI)

You have worked your way into the league of great living Englishmen who serve as role models for humbler souls: Men such as Roger Scruton, Peter Hitchens, Theodore Dalrymple, Nigel Farage, Pat Condell and may I in this closed circle add: Tommy Robinson.

Douglas Murray receives the Sappho Award because he has done his homework  so brilliantly and stood up staunchly for his position in the debate.
Your books, your articles, and your public appearances demonstrate the importance of truth - therefore, in the perspective of free speech, you are an inspiring example to follow.

Ladies and gentlemen, please acknowledge this year’s Sappho Award recipient - the one and only Douglas Murray.