Last week, China's official news agency thus issued a message that was not just a total neglect of the dictatorship's responsibility for the fatal consequences of the coronavirus worldwide - it was a definite tribute to the totalitarian regime's handling of the epidemic.

Even when Jyllands-Posten published in January Niels Bo Bojesen's ingenious satirical drawing of coronavirus in the flag of Communist China, many had a sense of the prophetic significance of the drawing. Now the drawing should be given invisible glory and immortal icon status, because it has hit the spot in so many ways.

Alone on Monday, March 9, the number of infected with the Chinese coronavirus in Denmark was upgraded from 59 to 90. At that time (Tuesday afternoon) that figure was further upgraded first to 113 and two hours later to 156 according to the website of the National Board of Health.

The Ministry of Foreign Affairs discourages travel to a number of countries - including not least a number of provinces in Italy, from which the infection has spread to, among other things, Denmark with tourists who have been skiing. Italy is so badly affected that health authorities now have to prioritize among seriously ill corona patients because they do not have enough respirators.

It seems that a pandemic can no longer be averted, and although the disease initially has a relatively mild course among otherwise healthy, younger people, this is far from the case for old and infirm where the mortality rate is between 8-15%. It's loud.

The government and the authorities are doing what they can to contain and delay the spread of the Chinese corona virus to mitigate its consequences - and hopefully, if people take the situation seriously and respect the orders that come, hopefully.

Added to this are the economic consequences, which may well be a new recession reminiscent of what we saw in 2008.
All in all, we are facing a crisis that is global and will affect virtually everyone both economically and healthily - and which has only one sender: China, and one reason: the Chinese 'dealings with living animals and food. Nevertheless, it is not to trace the remorse or self-knowledge of Communist China's dictatorial government.

Last week, China's official news agency thus issued a message that was not just a total neglect of the dictatorship's responsibility for the fatal consequences of the coronavirus worldwide - it was a definite tribute to the totalitarian regime's handling of the epidemic. Here the government boasted that the only Communist China had the virus under control and that the countries of the world should apologize to China for their criticism. At the same time, China is attacking countries such as South Korea and the United States for being too lethargic in their efforts to contain the Chinese coronavirus, which they themselves have spread and lied about the extent of. A totally grotesque and ungraceful response from the country that not only bears responsibility for the outbreak of coronavirus, but is also the hotbed of dangerous viruses such as SARS, and which, with uncanny and almost unshakable security, will also be the starting point the next time a viral virus becomes the cause of a pandemic.

For communist China, like so many other totalitarian regimes, there is absolutely no respect for individuals and human life. All that matters is the survival of the government and the preservation of the iron grip on the country and the people. And in the effort to maintain the power of the regime, lies, attacks and accusations against other states are perfectly legal means to use. Yes, even threats to stop medical device exports have been threatened by the Chinese government. A serious threat to the United States - and a host of other countries that have relied on China in this area.

Perhaps this is why no politician, neither at home or abroad, seems particularly busy in pointing a well-placed, accusatory index finger at China. Otherwise, it should be high time.

The time now is 17:58 and on the website of the National Board of Health the number of infected with coronavirus has been upgraded to 262. 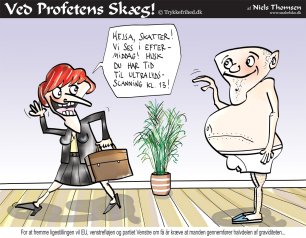