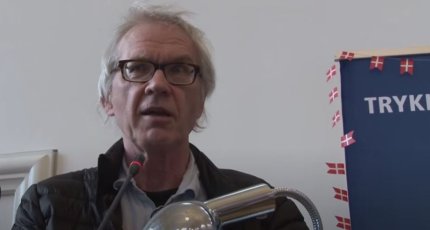 Lars Vilks was indomitable: he walked calmly through all his trials and tribulations with both his characteristic optimism and humor fully intact. He remained the same, and no one ever heard him complain about his fate or the lack of physical freedom he, under 24/7 police protection, had to endure in order to insist on freedom - not least freedom of speech.

With Lars Vilks´ sudden death in a violent car accident on Sunday, where also his two bodyguards, and the driver of the truck Vilks´ car drove head-on into, perished, the Freedom of the Press Society lost one of its very best, most loyal and most cherished friends.

Lars Vilks was his very own. He could not be harnessed to anyone's carriage. He was a self-declared anarchist, but his subtle, always warm and curious approach to people he met, made him friends in all walks of life, and in all elements of the political spectrum.

He was basically Sweden's answer to Bjørn Nørgaard and Per Kirkeby: rebellious, recalcitrant, (ræverød)? fox red, earning him early recognition; but where his Danish colleagues quickly and proudly drifted with the current, ending up with accolades, Lars Vilks remained true to his core, insisting on preserving his ideals of freedom. It cost him dearly: from the time he drew his little Muhammad roundabout dog in 2007, he lived under constant police protection, which, however, did not prevent more assassination attempts against him - with the terrorist attack on Krudttønden as the most violent and infamous.

This did not, however, in any way shut him up or in any way make him apologize for his art, and in that manner he was very much like Kurt Westergaard, who neither regretted nor apologized for having drawn the Prophet Muhammad. Not for political reasons, but in recognition that freedom is a fundamental precondition for artistic expression that cannot be compromised.

But here the similarities also end, because where Kurt Westergaard essentially met with support and understanding in Denmark, Lars Vilks was, in Sweden, not only shamed for his little Rondellhund, but definitively expelled from, and considered a pariah in the Swedish art world and among the Swedish so-called academia, which took it very poorly that Vilks openly stated that the pressure on freedom of expression was due to the fact that the art world was largely influenced by left-wingers, and that Sweden stands at the forefront of limiting socially critical debate and culture.

Vilks personified, with his own life and example, that it is with life and career on the line to insist on looking at contemporary art in an art historical perspective if you by doing so challenge the prevailing spirit-of-the-times , because its power and political influence is total: you cannot be critical and analytical to the `Zeitgeist´ and prevailing political currents without getting severely beaten up as it were: one after another, his lectures were canceled due to lack of security, and when they were occasionally carried out, attempts to sabotage them were made by protesters and protests. He was subjected to arson attacks and assaults, and numerous attempts to destroy his life's work `Nimis´ on Kullen were made.

The wonderful thing about Lars Vilks, however, is that he was indomitable: he walked calmly through all of these trials and tribulations with both his characteristic optimism and humor fully intact. He remained the same, and no one ever heard him complain about his fate or the lack of physical freedom he, under 24/7 police protection, had to endure in order to insist on freedom - not least freedom of speech. He will go down in history as one of Scandinavia's most important and brave fighters for freedom of expression - elevated above both the current Zeitgeist and political currents.

In the Freedom of the Press Society we stood by his side all the way, and he never forgot us and never said no when we asked him to attend our events: he was a guest at our Humor Conference in 2010, he was with us at the Folkemødet (the yearly Folk Meet) and in March 2015, only a month after the terrorist attack on Krudttønden, he received the Freedom of the Press Society’s Freedom of Expression Award, the Sappho Award for his efforts for freedom of expression. A month ago he agreed to make a podcast with us as part of the company's podcast series, which so far includes podcasts with Lars Hedegaard, Steen Raaschou and Bent Jensen.