The author must have been a wise man, he managed to keep his identity a secret. Monty Python’s movie Life of Brian pokes fun at Christianity. The movie stirred up anger and controversy in 1979. Nevertheless, the movie could be watched almost everywhere. The makers, Terry Jones, Graham Chapman, John Cleese, Eric Idle and Michael Palin received neither death sentences nor did the Public Prosecutor lift them from their beds and put them behind bars.

Nekschot - hiding his identity and making a statement

These two fairly random examples illustrate that in Western Europe, religion – in the cases mentioned Christianity – has been ridiculed for ages. First this was done anonymously or under pseudonym, later openly. In Western culture, rationalism, science, humanism and democracy, in a lengthy and painful process, created the separation between Church and State. Freedom of Speech became a constitutional right in many countries. Thus, ridiculing Christianity, without fear of losing one’s life, has been possible for quite some time.

When large numbers of migrants with a different cultural and religious background came to Western Europe, things fundamentally changed. Poorly educated – and without exception raised under dictatorial regimes – a lot of immigrants with an Islamic background cannot agree to our separation between religion and politics, no matter how self-evident this separation appears to us.

Monty Python makes fun of Jesus in Life of Brian. A comparable movie about the life of Mohammed – the founder of Islam – is out of the question. The dreadful fate of film director Theo van Gogh says it all. The horrible and sadistic manner in which Theo van Gogh was ritually slaughtered by a fanatical Muslim meant a return to the Dark Ages for the Netherlands as far as the freedom of speech is concerned. Anyone who has the urge to say something about Islam has to do so most carefully.

On May the 13th of the year 2008, however, the cartoonist Gregorius Nekschot was dragged out of his house by ten civil servants and thrown into jail. Moreover, his home was searched and his computer, mobile telephone, agenda and sketchbooks were confiscated. Cartoons that allegedly discriminated against ethnic minorities and against Muslims caused captivity and a far-reaching infringement of his privacy. Such is the state of affairs in the Netherlands, a country which until recently, was seen as broad-minded, ‘free-thinking’, and enjoying a satirical tradition of more than seven centuries.

How do we interpret this arrest? What has changed in the Netherlands in the past years? Why was Gregorious Nekschot, with his skeptical view on the blessings of a multicultural society, thrown into jail? A number of possible motives and explanations present themselves.

First, the Second World War has left deep scars in Dutch society. The lack of resistance against the deportation of Jewish fellow countrymen has long been a taboo in The Netherlands. This lack of resistance led to a collective trauma in the post-war generation of baby boomers. Satirizing aspects of religion, except Christianity, became something suspicious. In the eyes of baby boomers, any joke about a strange religion or race became the first step towards the trains to Auschwitz. Nekschot was born in the sixties. He is younger than the baby boomers. Therefore a generation conflict could be the motive for this attempt to silence Nekschot's cynical comments on modern times.

Another Dutch trauma is the colonial past. For a long period the sun never set on Dutch controlled lands. The Dutch profited from the slave trade, and exploited the local populations in the East and West Indies. But they did more than that: they also introduced health care and education, built roads and railroads. This, however, does not lessen the guilty conscience of our baby boom airheads regarding their colored fellow countrymen. Every joke or critical remark about immigrants from our former colonies is seen as an expression of racism. Thus, the ‘we-are-dreadful’ mentality of these do-gooder baby boomers could also be a motive to get rid of the cynic Nekschot.

After the Liberation by the Red Army in 1945, Poland, East Germany, Hungary, Bulgaria, Czechoslovakia and Romania experienced the abominations of communism. The Netherlands, thank God, was liberated from fascism by the Americans, British, Canadians and the Free Poles. Safe under the American nuclear umbrella and indulging in the welfare boom, for decades socialist inspired Dutchmen nourished their dreams of a utopian Socialist Welfare State.

When communism collapsed, socialist inspired Dutchmen simply exchanged their bankrupt belief in the Socialist Utopia for a belief in a Multicultural Utopia. The romantic image was of a Multicultural Utopia that ought not to be disturbed by anything. The antisocial behaviour and religiously inspired insanity of a number of immigrants should not be discussed or even criticized, not even in a cartoon.

In typical and reliably old fashioned ways, left extremists do not shun censorship, because a Socialist or Multicultural Utopia does not create itself. It is therefore no surprise that the ultra-leftwing non-governmental private organization Dutch Complaints Bureau for Discrimination on the Internet (MDI) cooperated with an orthodox imam to nail Gregorius Nekschot. The pathological need for a romantic ideal, with Muslims and colored people in the role of noble savages, is hence yet another possible motive to silence the anti-romantic cartoonist called Nekschot.

Danish meat and dairy export suffered from boycotts after the publication of the – by now well-known – Danish cartoons. In the Netherlands, fear of decreasing exports of deserts, chocolate milk and sausages to the Middle East, led to the creation of a secret Interdepartmental Cartoon Problem Bureau. This secret Bureau, perhaps the most laughable institution in Dutch history, appears to have come to the conclusion that cartoonist Gregorius, on his own, presented a much larger threat to Dutch export than all Danish cartoonists put together did for Danish export. Thus, economic considerations may have been a motive: prevent export losses by silencing Nekschot.

In the Netherlands everybody still remembers the hysterical way in which Prime Minister Jan Peter Balkenende reacted to Fitna, the anti-Islam film by the Dutch parliamentarian Geert Wilders. Balkenende distanced himself loudly, well in advance of the release of Fitna, even without knowing the contents of the film. Prime Minister Balkenende also put severe pressure on Wilders to refrain from releasing Fitna, despite his being a parliamentarian and having a constitutional right to freedom of expression. Fear of trouble with Muslims drove the Prime Minister and his cabinet to questionable servility and compliance. Fear of Islam and panic could have been the reason for these governmental top executives to have the cartoonist Gregorius Nekschot arrested. Cowardice and betrayal are therefore imaginable as the motives for silencing Gregorius Nekschot.

With the arrival of recognizable Muslim immigrant communities to the Netherlands, Christian politicians saw a chance to gain back lost influence in a now almost entirely secularized country. Attempts by successive Ministers of Justice, Piet Hein Donner and Ernst Hirsch Ballin, both Christian Democrats, to revive an obsolete law on ‘offensive blasphemy’ after the murder of Theo van Gogh by a Muslim, point in that direction. Thus, Christian Democratic opportunism whereby the role of victim and perpetrator is reversed once again, could be a motive to teach the godless heathen Gregorius Nekschot a lesson.

In contrast to the ‘Old Media’, the Internet has until now escaped governmental control. Naturally, this is a thorn in the flesh of moralists. For this reason, under the leadership of Prime Minister Jan Peter Balkenende, a ‘civilizing offensive’ has started. Christian Democrats firmly believe that ‘freedom comes with responsibility’. For Christian Democrats this means that constitutional laws on Freedom of Speech are subordinate to those on Freedom of Religion. As they see it, Christians and Muslims may for religious reasons discriminate against women and homosexuals as they see fit, but Christians and Muslims themselves may not be criticized, as this would be seen as legally forbidden discrimination.

Gregorius Nekschot, manifesting himself mainly on the Internet, was forcibly arrested. A clear signal to the general public there are limits to what is acceptable on the Internet. Thus, the desire to get a grip on the Internet may have been a motive to shut up this fiendish Nekschot.

The last motive on this list concerns – for the time being – is the personal ambitions of the Public Prosecutor in Discrimination Cases. A Public Justice Magistrate who wants to play God is indeed a new phenomenon in the Netherlands. With the arrest and the breaking of Gregorius Nekschot’s anonymity, the Public Prosecutor loads a heavy responsibility on his shoulders. Not only is the arrest of a cartoonist a direct attack on the Freedom of Speech, in a world full of Muslims who wish to impose sharia law by force, it is a license to kill.
In short: even Nekschot himself could have thought of enough motives to arrest a Dutch cartoonist in the Year of our Lord 2008.

So, what has changed in the Netherlands? The present governing coalition of orthodox Christians, Christian Democrats and Social-democrats is an outright disaster. The Christians in the cabinet try to rob the Dutch of their traditional small pleasures. A smoking ban, a ban on prostitution, a ban on smoking weed, and a ban on magic mushrooms have been introduced. The list is longer but, one by one, these are all attempts to teach the Dutch that their life on earth is not meant to be pleasant.

Christian politicians’ fear of social unrest is deeply rooted. Former Prime Minister Colijn even advised his fellow countrymen to collaborate with the Nazis and abort all resistance after the defeat of the Dutch army in 1940. A cartoonist who pokes fun at Islam is exactly the type of "subversive element" that orthodox Christians and Christian Democrats would rather see the backside of.

Social-democrats, previously well known for their anti-religious behaviour, appease Islamists with subsidies and preferential treatment. They do this for electoral purposes. For instance, Job Cohen, the social-democrat mayor of Amsterdam, has personally abolished the separation of Church & State in the Dutch capital, only to please Muslim voters.

This poisonous cocktail of religion, religious insanity, Christian opportunism and left-wing self-interest has created a deadly threat for Freedom & Democracy in the Netherlands.

Extremists have already killed a politician and a movie-director in the Netherlands. Now the Dutch State has started to arrest and intimidate artists. It is frightening to see how fast, and how easily, the Netherlands is slipping back into dark times.

In the year 2008 it was Gregorius Nekschot who was arrested and thrown into jail, in 2009 there will be others.

Ladies and Gentlemen, once you trade your freedom for peace, you are doomed. The Netherlands, and I am sorry to say so, has set a very poor example. 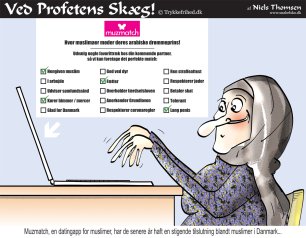