The Sappho Award to Ezra Levant 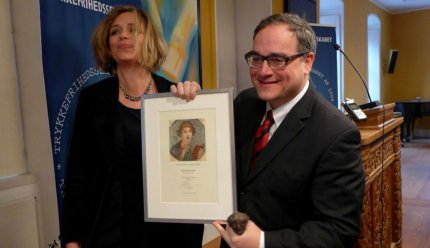 By his love of freedom, his integrity and his sharp-wittedness Ezra levant  has demonstrated to us all why hate speech laws are an abomination in a free society.

“To be corrupted by totalitarianism one does not have to live in a totalitarian country.”

The recipient of the Sappho Award 2014 knows this better than anyone else.

In 2008, when he became a victim of this soft totalitarianism, he decided to embark on a one-man struggle to oppose it. And he prevailed.

For that reason it is an exquisite honor for me to award this year’s Sappho Prize to Ezra Levant.

“It brings tears to my eyes”

Your story is a frightening example of how far a Western country is willing to go to combat so-called “hate speech”. It is also an edifying tale about the difference a lone citizen can make.

Sometimes, when I despair and am about to lose my vigor in the lengthy, tough and sometimes tiresome struggle for free speech, I click on to YouTube to once again enjoy the video where you wiped the floor with the female representative of the Canadian state’s soft totalitarianism. That restores my fighting spirit and good mood. And I’m not the only one.

Bent Jensen – one of Denmark’s leading historians, who has just published a distinguished work on the Cold War – has this comment on your video:

“It brings tears to my eyes every time I see and listen to Ezra Levant – his dauntlessness, his ability to expose his interrogator’s despicable questions, his whole fighting style. He has set a fine example for the rest of us to follow.”

Yes, Ezra Levant, you have set an example – and on this side of the Atlantic, you have given us inspiration to carry on the struggle that all freedom-loving Westerners have an obligation to wage.

Permit me to retrace the historical events.

In February 2006, Ezra Levant’s news magazine, The Western Standard, was the first media in Canada to reprint the Danish Muhammed cartoons.

An imam was so incensed at these – as he described them – “hateful” drawings that he went to the police and demanded that Ezra Levant be arrested. When the police refused to comply, the imam went on to one of Canada’s numerous “human rights commissions” empowered to implement the country’s hate speech laws.

»I am expecting a formal apology … from the The Western Standard. Please help,” the imam said.

Instead of rebuffing the imam with a condescending smile, the human rights commission took his complaint dead serious.

The entire apparatus was mobilized against Ezra Levant. Later he found out that the commission had spent 900 days and secured the services of no less than 15 government employees to prepare the case against him.

When Ezra Levant contacted his lawyer, he was told that faced with the might of the human rights commission, most people give up, pay up and apologize.

Nobody had ever been acquitted after being accused of a human rights violation.

Ezra Levant could have chosen to cave in. He did the opposite: The human rights commission would get all the opposition he could muster.

In early 2008, he was summoned to a preliminary interrogation based on the imam’s complaint that he had violated the Koran’s proscription on blasphemy.

In Levant’s own words: »It was really happening: I had become the first journalist in the free world to be grilled by a government inquisitor about the cartoons.”

Ezra Levant made one demand as a condition for appearing before the inquisitor: That he be allowed to make a video of the interrogation. With hesitation, the interrogator, a woman by the name of Shirlene McGovern, complied. It was a decision she would live to regret.

A few days after Ezra Levant had posted the video on YouTube, it had been seen by 400,000 and created a perfect storm in the media.

And it is truly worth a look. With crystal clarity we are presented with a confrontation between a state representative demanding unlimited power to regulate the thoughts and pronouncements of citizens – all in the name of self-evident righteousness – and, on the other hand, a dedicated opponent of totalitarianism

Shirlene McGovern opening question is revealing: What was your intention when publishing the Muhammed cartons?

»Why is that a relevant question,« Ezra Levant replied.

»I always ask people their intent ... what was the intent and purpose of your article with the cartoon illustrations,« Ms McGovern answered soothningly.

But Levant was far from reassured. (Subsequently, he commented: »That one sentence summed up the commission's illiberal nature. The idea that the government could haul in a publisher and force him to answer questions about his political beliefs didn't seem extraordinary to this woman. Apparently, it was all in a day's work.”)

Ezra Levant fired back: ”We published those cartoons for the intention and purpose of exercising our inalienable rights to publish whatever the hell we want, no matter what the hell you think.”

Evidently, Ms McGovern wasn’t used to this attitude among her victims and appeared dazed by Ezra Levant’s broadside. And he continued: »It speaks for itself, that you dare ask a publisher in Canada in the name of the governement what his political thoughts are. It shows you are hunting for at thought crime.”

Thought crime – with this Orwellian expression we are at the core of not only this case but all hate speech cases. When the state is not satisfied with punishing actions but strives to criminalize what is in the soul of citizens, it has embarked on a course to proscribe all genuine freedom conscience. And it was freedom of conscience that was in the dock that winter’s day in 2008.

That’s why it was both courageous and important that he asked for the case not to be dropped.

As he told the increasingly dispirited inquisitor Ms McGovern: »I reserve the maximum freedom to be maximally offensive, to hurt feelings as I like. I didn’t do that in this case. It was a reasonable publication, but that is not what should exculpate me; my right as a free man should.”

He added that he hoped Shirlene McGovern would take the case to a court of law in order to highlight the political scandal that it was. What a happy coincidence that the human rights commission chose to challenge a man like Ezra Levant who proved to be their downfall.

Out there in front of their computers people were jubilant and their rage was directed at state inquisitor Shirlene McGovern. It took only ten days for the human rights commission to announce that its servant had laid down the case, whereupon the chronically offended iman hastened to withdraw his complaint.

Most importantly: The public had seen for themselves what the hate speech legislation is all about. And last year its most notorious article, Section 13, was abolished.

This marks a rare and unusual victory in our common campaign against hate speech legislation. Canadian law has become less ”corrupted by totalitarianism”. And we owe this to Ezra Levant.

Dear Ezra Levant, if anyone deserves the Sappho Award, you do.

And by your love of freedom, your integrity and your sharp-wittedness you have demonstrated to us all why hate speech laws are an abomination in a free society.

Once upon a time we could flee the old depressing world for a free life full of hopes in Canada and USA. Today, alas, we cannot escape. Tyranny has encroached on all democracies endangering constitutional rights and law and order. Mind what you are saying, watch your step! Sterner times are here again. The most scaring part of it, however, is people's recklessness. Most people, it seems to me, don't care, don't even want to know. Desperate, I must cry with Dante, " Abandon hope, all ye that enter here". Shipwrecked on both side of the Atlantic our constitutions can be defended only by hard proven free men like Ezra Levant and civil organisations like The Free Press Society. Our institutions are failing except in misleading, and outright leading people astray. Peoples' reaction, when fighting back might begin, I dare not speak of. Suddenly a movement cannot be stopped. 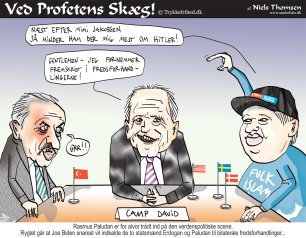