It's Your Life or Your Thoughts
Ayaan Hirsi Ali nurtures a dream of making a muslim "Life of Brian" with all the juicy details of the prophet Muhammed's life as a conqueror and womanizer - and if possible in Denmark. All they have to do is call

Disturbing questions about the massive muslim presence in Europe are becoming more urgent by the day: It it possible to integrate muslims to become part of Europe? Will we have a liberal version of islam? And if not, what is there to look forward to? Civil war? Dissolution? An islamic take-over?

If your head is full of such nagging thoughts, it is a solace to meet Ayaan Hirsi Ali, the liberal Dutch politician and originally muslim immigrant from Somalia. Since the murder of Dutch film maker Theo van Gogh, for whose strongly islam-critical film "Submission I" Ms. Ali wrote the script, she has been under constant police protection. That was also the case when Sappho.dk interviewed her during her recent visit to Copenhagen.

But in spite of death threats and constant vilification the slender woman has by no means lost heart. She still waxes eloquent when she talks about the issue that concerns her the most: The defence of European civil rights and particularly freedom of expression.

Ayaan Hirsi Ali comes across as a genuinely European intellectual of the kind that is becoming increasingly rare as our home-grown cultural personalities and opinion leaders are buzily discarding our intellectual heritage.

The strength of art

Why does this thoroughly political person with her background as a political scientist express herself through an artistic medium?
"Because sometimes art is much more powerful than words. Art is accessible to many more more people than if you write a piece on an op-ed page. To understand art you don't have to know how to read and write," says Hirsi Ali, who then turns to the international furor caused by the twelve drawings of the prophet Muhammed recently published by the Danish national daily Jyllands-Posten.

"It is absolutely necessary for liberal European countries like Denmark to protect free speech. I've been in Holland for 13 years, and in a very short time I have learned how Europe came to be what it is today. And part of that was a huge conflict of religion. It started with the Reformation and reached its climax during the Enlightenment. If you refrain from making cartoons of Muhammed to accommodate Islamic intolerance, then you will go back to the time of Christian intolerance."

- Have you had any support among Dutch artists for your position?
"Yes, most of them do not agree with the style of what I have to say, but they find that I have the right to say it. I'm going to make a film called "Submission II", and the people who want to help me make it think that it is my decision what I want to say. I'm so happy about that. It's a big relief because at first I was afraid nobody was going to help me. The next challenge will be who is going to broadcast it. Which TV-channel, which cinema? But we will cross that bridge when we get to it."

A muslim "Life of Brian"

- You have said that you would like to make a muslim "Life of Brian".
"Yes, Muhammed is a much more colourful personality than Jesus. Such a film could be a learning instrument for muslims. There are some islamic films but they don't show the image of Muhammed and they are not really about him. They are more about how islam was established. I would really like to make a critical film about him. I could write a script very quickly."

- Would you dare to put in some of the details of his life such as the affair with Aisha, who Muhammed married when she was six and had sex with when she was nine?
"Oh yes. When I say colourful, Muhammed was of course a messenger of God like you read in the Bible about Noah and Moses, and you could make a beautiful film about that. But it would be much more interesting to describe that he was also a conqueror. He was superstitious. Every time he would need the support of his people, he would go to the cave to listen to the angel Gabriel. Putting that in a film would be very colourful, because whose voice is it going to be? Who could act as Muhammed?"

"Muhammed had many wifes. He was a sensuous man. He talked lot about sex and sexuality, about women. You can read that in the Koran and in the Hadith. They are very detailed on the sexuality business. For the Americans it might be too much but I'm sure that the Europeans would find it very colourful. I would put all of that in there in graphic detail, but also the moral dilemmas. Muhammed had adopted a son who was married to Zaynab. He fell in love with Zaynab and wanted her, but morally, of course, he could not demand to have her although his adopted son said that he could have his wife. So Muhammed had to go the cave and came back with a message that it was all right."

Why not in Denmark?

In fact Muhammed always seems to have received a divine revelation whenever his private affairs required it, says Ms. Ali. He also had one when some of his followers refused to annihilate other tribes. The Arabian tribes were constantly fighting each other but there were limits to what they would do. It was all right to kill off the men but you let the women live. There were also unwritten tribal rules about the confiscation of property. Muhammed broke many of these rules and defended his decisions by means of revelations that he had conveniently received.

"The Koran is a compilation of all the voices from the cave. I would just love to make a film about that. I would love to direct it. But who can I persuade to make such a film?"

- Would you make it in Denmark? We have a Film Institute financed by the state which would probably be prepared to fund an exciting and controversial film.
"All they have to do is to give me ring, and I'll come."

To Hirsi Ali Muhammed comes across as a person with many contradictions. He was always buzy with some intrigue, but there are also stories that he could be kind and magnanimous.

In many ways the prophet can be compared to Yassir Arafat, who always managed to present himself as a hero and restistance fighter despite all his bad characteristics. If you want to get a sense of the kind of preson Muhammed was, Hirsi Ali recommends an article on Arafat in the September 2005 issue of The Atlantic Monthly.

"When I read that - with my special background - I thought: That is so typical. He had it from somebody."

- Could you mention some books or works of art that have inspired you?
"First of all there are the philosophical books that you have to read when you take political science. I didn't like Plato. Everybody is crazy about Plato. I thought that Aristotle was really boring. I loved Mill. I like Popper very much. He writes in very short sentences and all his thoughts are linked. He doesn't forget one step. Sometimes it is difficult to read the other German writers like Weber. Another writer I like - though you have to take your time reading him - is Norbert Elias. Then there is of course Locke. Spinoza has influenced me through his political end ethical writings. His technical stuff is completely inaccessible to me. But his personal story and his fight with the synagogues have also inspired me. Spinoza was cursed and the wording of the curse is exactly the same as in islam. It is almost the same words Khomeiny used to curse Salman Rushdie."

-Are you at all influenced by any muslim thinkers?
"I have read Ibn Khaldoun, but he was not introduced to me through islam but through westerners who had translated his works. I have heard about Taha, who was hanged in his native country of Sudan for demanding changes. I'm influenced by Ibn Warraq, who is not a good writer but a good thinker. So to answer your question, there are muslim thinkers but they just don't have the opportunity to come forward. Like Ibn Warraq. If he would be giving interviews, be on television, giving talks, he would be more elaborate than me because he knows more than me. But of course he has to be careful."

"Unfortunately there has been no muslim Popper, Mill, Hayek, Kant or Locke. Before 1100 they were always killed. It's your life or your thoughts."

- The Egyptian novelits Somaya Ramadan, who no longer considers herself a muslim, has said that the Arab language is difficult to work with because it is considered sacred. For that reason you cannot play with it.
"Oh yes. It is as if I woke up one morning and said that Evian Water is sacred. No language is sacred. To claim that is a non-violent way of stifling freedom of expression. If the Arabic language is sacred, how can Arabs ever think creatively, how can they express themselves? It is nonsense."

"I was recently together with some Arab journalists and I took out a Koran from my bag and put it on the ground. A Turkish girl who didn't wear a headscarf and seemed in every way secular, said: I demand that you pick up the Koran and put it back into your bag. I answered that it was my copy and that I would do with it what I liked. What is happening now is that you cannot analyse the content of the Koran because everything about it - the cover, the letters, the ink - is sacred."

- Are you optimistic about the prospect of reforming the islamic majority countries?
"Yes, if we remove the sacred stamp from the Koran, if we review the prophet Muhammed's role and if we change the sexual morals, then yes, we could do it very easily. Because muslims are also human, and humanity has shown that it can change and that it can humanise and modernise its way of life." 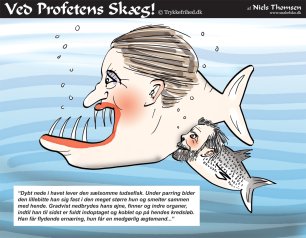