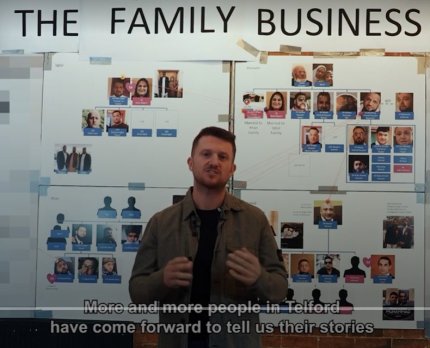 2. part of the documentary ’Rape of Britain’ not only exposes decades of assaults on English girls ignored by the authorities. It discloses ever more precisely the reasons behind this: in England working-class people are not valued.

On Saturday May 7, Tommy Robinson published 2.part of his documentary The Rape of Britain on the platform Gettr.

This is an appalling documentation in 5 sections of how grooming, raping and terrorizing girls from the age of 10 has been perpetrated by Pakistani men. The first section of this documentary is focused on Nicole from Telford, who is one of the many victims of her town. She speaks of yearlong exploitation, rape and abuse by Pakistani men, ending up in becoming pregnant from one of them. She tells of a corrupt police in the grip of Pakistani ringleaders, shelving reports of the rapists by her family and by herself, which were never investigated nor brought to court.

The second part was published Saturday and is focused on yet another testimony. This time from an anonymous - now grown-up - woman, who tells us a likewise hard-to-digest story not meant for the weak of heart. It is a duty to oneself and not the least to the victims to listen to these primitive yet calculated maltreatments. Not only with a view to their courage and the importance of exposing these crimes but maybe particularly because combing these testimonies with the careful and unrelenting research by Tommy Robinson shows us a British society which has long ago ceased to be under rule of law – if it ever was.

Unrelenting is actually an understatement for anyone who – taken aback - has followed Tommy Robinson, his energy and untiring efforts to call attention to the consequences of the demographic changes taking place in England. And this despite being persistently shamed out and defamed as a racist and a thug.

As seen from such a perspective this documentary from the hand of Tommy Robinson on the grooming scandals of Telford, their extent and consequences for the victims ought to become the very turning point of his yearlong work. The very moment, where authorities and people in charge of all designations lay off their aversions against Tommy Robinson, open their eyes and recognize that something is fundamentally amiss in British society.

But does it happen? Police authorities in Telford refuse to speak with Tommy Robinson and refuse to receive his extensive documentations. British mainstream media have consistently ignored both 1. and 2. part of The Rape of Britain. And this despite the seemingly irrefutable fact that about one in five of Pakistani men in Telford have been involved in rape of the girls in town through many years.

From a Danish perspective it seems unbelievable, that a corrupt police and authorities getting away with refusing to receive documentation of the most severe crimes against the very weakest part of the population can stay safe from the so-called Fourth Estate: the Press.

A very depressing picture of an ever more polarized and class-divided British society begins to take shape. A society, where the working-class is so marginalized as to not even deemed worthy of protection having lost its basic civil rights. Which probably also plays an important part in explaining the steady rancorous efforts to crush Tommy Robinson: he is, himself, part of that working-class, whose exposedness to the demographic changes, he has cried alarm about quite a few years already.

Seen this way The Rape of Britain discloses much more about British society than ’merely’ documenting Pakistani grooming gangs, corrupt police and failure of authorities. Lack of official British reactions, broadly speaking, to the documentaries displays an unconcealed spite of a whole class in society. It has no importance, it is troublesome when complaining, it should obviously rather be ignored. And so much more Tommy Robinson himself, not only due to his conviction of violence which is ever and again brought forward – that is only a pretext. Basically: he should know his place and behave accordingly: shut up and no more grumbling.

But Tommy Robinson has refused to keep silent and continues, persistently, to call alarm to the difficulties connected with the immigration of Muslim populations. Difficulties almost entirely imposed on the English working-class. Doing it, that is, more brilliant and informed than the ever more desperate middle- and upper-class he is set against. People with more than common difficulties in sticking to the illusion of a glorious multicultural society while utterly unable to defend it rationally.

We are promised at least 3 more episodes of The Rape of Britain and I will recommend everyone to follow them. They are not simply shocking documentations of assaults on English girls – they will stand out as key witnesses to a whole layer of the population, which was let down.