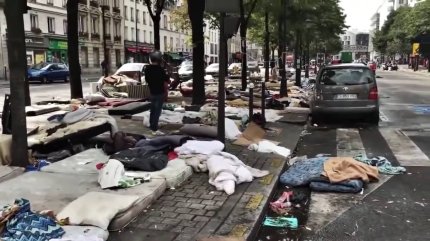 The French authorities are trying to limit the inconvenient utterances of Islam critics by increasingly suing them. Several anti-racist organizations have also sued. The lawsuits are resource intensive for the defendant, no matter the outcome of the lawsuit.

The subpoenas have hit Pierre Cassen, Georges Bensoussan, Renaud Camus and Eric Zemmour, among others.

France is a country with increasing tension between different population groups. After several terrorist attacks in 2015, the country introduced a state of emergency made permanent in 2017 – effectively making it the new normal. In these circumstances, the authorities are trying to limit the inconvenient utterances of Islam critics by increasingly suing them. Several anti-racist organizations have also sued. The lawsuits are resource intensive for the defendant, no matter the outcome of the lawsuit.

The subpoenas have hit Pierre Cassen, Georges Bensoussan, Renaud Camus and Eric Zemmour, among others. Zemmour - widely known in the public for his marked attitudes and his pessimism as to the future of France as a result of the scale of immigration, is well known. However, a recent transmitted speech triggered a real shit-storm, with the desire to silence him in public, death threats, and a lawsuit as a result.

In 2007, leftist atheist Pierre Cassen created the Internet magazine “Riposte Laïque”, which advocates secularism and is Islam-critical. This has led to an avalanche of lawsuits against the editor and the journal. In the years 2012-2017 alone, 43 complaints were filed against Riposte Laïque for provoking hatred against Muslims. The lawsuits originated from several Muslim and anti-racist human rights organizations, Paris Mayor Anne Hidalgo, and former Interior Minister Bernard Cazeneuve. The total cost of the ongoing litigation, damages and attorneys' fees amounts to around € 30,000 (DKK 224,000). In February 2018, Pierre Cassen was sentenced to 3 months suspended prison time.

Historian Georges Bensoussan is the author of the books ”Les territoires perdus de la République” (Lost Territories of the Republic) published in 2015, and “Une France soumise” (A Suppressed France) published in 2017. In 2017 he was sued by France's anti-racist organizations in collaboration with the “Collective Against Islamophobia” in France. The lawsuits ended in dismissal, but he lost his job at the Paris Holocaust Museum.

In 2012, Renaud Camus wrote the book “Le Grand Replacement” (The Great Replacement), describing the decay and gradual replacement of French culture with Islamic culture, the higher birth rates of Muslim families, and the integration problems in France. Camus was immediately attacked by several commentators, calling him a conspiracy theorist who practiced anti-Muslim racism. He has since been barred from speaking in the established media. Camus was prosecuted in 2014 for inciting racial hatred.

The harassment against Eric Zemmour

Islam critic Eric Zemmour is a political journalist at “Le Figaro”, a TV host in several programs, a former RTL radio host, and the author of several bestselling books. He has thus been harder to hit on his livelihood than the above mentioned writers. He has received several subpoenas over the years for his Islamic critical statements. At a conference organized by the journal “L'Incorrect” on September 28th, 2019, Eric Zemmour gave a speech describing the country's grim situation as he sees it. The speech was in line with his earlier statements "In France, as in the rest of Europe, our problems - I do not say "created" but "worsened"- are exacerbated by immigration: education, housing, unemployment, social spending, government debt, public order, the prison system, business qualifications, emergency rooms, drugs. All of the problems caused by immigration…are further exacerbated by Islam. It is double punishment”. The speech, which can be read in English here, was broadcast directly on TF1's nationwide news channel “LCI” (La Chaine Info), which drew fierce criticism. Journalists on other channels accused LCI of spreading hate propaganda and, together with a former member of the National Radio and Television Council, felt that LCI should lose its broadcasting license.

At Eric Zemmour's Le Figaro workplace, journalists demanded that the editorial board fire Zemmour, as they did not want to be associated with his provocations. The newspaper's editor-in-chief, Alexis Brézet, apologized to Zemmour - without firing him - and reminded him to obey the law. The leftist movement “SOS Racism” is putting indirect pressure on Le Figaro to get them to fire Zemmour, calling for the boycott of the companies advertising in the newspaper.

Another employer has been the radio station “RTL”. They decided, as a result of the speech, to discontinue cooperation with Zemmour, since "his views are incompatible with the spirit of the debates in which he participates in radio, and more generally with the community that characterizes RTL."; Journalist Jean-Michel Aphatie, who works at RTL and LCI, called on the 5th of October on France 5 Zemmour for a "habitual offender" who should not be allowed to speak anywhere. Aphatie also compared Zemmour, a Jew, to a well-known French Holocaust denier.

The prosecution of Eric Zemmour

Over the years, Eric Zemmour has been repeatedly accused of racism. Following the September 28th, 2019 speech, the Prosecutor's Office announced on October 1st that they are suing Eric Zemmour for "public insults"; and to "publicly provoke discrimination, hatred or violence".

Zemmour's lawyer Olivier Pardo states to AFP: "I wonder if the State Attorney has read Eric Zemmour's speech in its entirety, because it is settled case-law that (harsh) criticism of a religion is not illegal. Blasphemy is not illegal in France ”.

The hatred degenerates into expressed desire for Zemmour to die

Eric Zemmour has long been hated; however, it has recently escalated. On the web, several people write how they want to torture or kill Eric Zemmour. They appear to be watching his daily goings about, what train stations he uses, when he goes to the swimming pool, etc. A "playgal cami" writes thus: "So you are able, from one floor of a book store, to shoot Kennedy in the head while his car is moving, but not Zemmour, who swims laps in a swimming pool at the 17 . [arrondissement]?”. An "Esther" asks if there isn’t somebody who would kill Zemmour? An "almammoniaque" tweeted on September 30: "On Monday, Eric Zemmour takes line 7 from Gare de l'Est to Cadet at 14 (in case a serial killer on the lookout for a good victim sees my tweet)". "Héra" suggests going into the station simultaneously with Zemmour and pushing him out in front of a train.