According to Mina Dennerts, the most used and simple way to instruct group members on what to do is this brief instruction: “Do you have a hateful person among your Facebook friends? Follow the articles they share on the media channel's Facebook page. There you often find an incredible amount of simmering hatred. ”

The Swedish network "Jagärhär" originally started as a facebook group, but today it is a professional association, which, according to their website "... works for a democratic and inclusive society without discrimination, hatred and fact resistance". The association, which is supported by a number of Swedish politicians and cultural figures such as Malena Ernman, Greta Thunberg's mother, wants to "... remove both derogatory words and offenses linked to discrimination based on racism, sexism, homophobia and “funcophobia" (funkofobi).

It sounds extremely Swedish - and so it is: even the most extreme segments of society would have to look up this word; but it means (irrational) anxiety for people with disabilities, which leads to the obvious question as to whether there are “funcophobes” in Sweden at all.

The association, on its surface, is an inclusive and peace-loving mission, made concrete and operational by engaging private individuals to join the facebook group # jagärhär, where one can report so-called net hate and discrimination, and activate the group's other well over 70,000 members and "propose actions", as the group's founder, Mina Dennert, expressed in an interview with the leftist journal ETC. Mina Dennert herself states that she has, all her life, been subjected to lifelong hatred because of her "Muslim appearance" and because she is a woman. The fact is, she was adopted from Iran by her Swedish parents at one year of age, and has since lived an extremely privileged life in a wealthy neighborhood in Gothenburg. Nevertheless, she paradoxically states her own background as the basis for the fight against the slanderous hatred that prevails among Swedish Facebook users.

According to Mina Dennerts, the most used and simple way to instruct group members on how to do this is this brief instruction: “Do you have a hateful person among your Facebook friends? Follow the articles they share to the media channel's Facebook page. There you often find an incredible amount of simmering hatred. ”

That hatred must be fought – hard - as Jagärhär's ultimate purpose is, as I said, to eliminate abuse and derogatory remarks – mind you this apparently only pertains to certain minorities: Trump and Putin sympathizers, plus national-minded and more conservative Swedes are not covered by this protection. Furthermore, if you are audacious enough to be interested in immigrants' share in the explosive growth of crime in Sweden, you are fair game for Jagärhär's systematic informants, and the persecuting of people who are perceived as exclusive and phobic.

The Bulgarian / Swedish researcher Bilyana Martinovski has had to learn this the hard way: in 2017, she was employed by the University of Stockholm where she, amongst other things, researched in virtual assistance programs for victims of violence. In this connection, she became aware of the extremely high incidence of gang rape in Sweden, rapes which were almost entirely perpetrated by young offenders with immigrant backgrounds.

She tweeted about the topic on her private Twitter profile - and suddenly she received an email from her boss, Professor Uno Fors, who among other things wrote: "I have seen that you have been active on Twitter and discussed, among other things, immigration, nationalism, and a host of other politically sensitive issues [...] since you mention DVS as your current employer, it poses a big problem for us." - without notice and observance of the usual rules of party consultation and negotiation - from one day to the other, Bilyana Martinovski was fired from her research position at the University of Stockholm.

It was not Uno Fors who had examined Bilyana Martinovski's twitter profile herself, but rather a very zealous member of Jagärhär, Kajsa Klein, who among other things, had written the following to Uno Fors:

“Do you know where Bilyana is now? I have a very hard time understanding that you wish to be connected to/legitimize her.

p.s. Several at SU (Stockholm University?) Are informed about this, the security department, the press department etc. ”

This defamation and not so subtle suggestion to get rid of Bilyana Martinovski had immediate effect, but Kajsa Kleins and Jagärhär's persecution and harassment of her continued. Among other things, Kajsa Klein wrote the following to the University of Gothenburg, where she had been previously employed:

"... yes, right-wing extremist, all-right, etc. SU found that the only thing she seemed to like was Putin - possibly Trump ... The case lies with the Democracy and Hate Crime Unit of the Stockholm Police."

Today, it is impossible for Bilyana Martinovski to obtain employment at any university in Sweden. Despite a long and distinguished resume with previous positions at recognized universities in Europe and the USA, plus several academic publications, she is currently “berufsverbottet” in Sweden. She has had her career and future ruined by a network such as Jagärhär, which states that they are inclusive and promote democratic conversation, but which is in fact an informal monitoring and informant activity of opinion opponents wrapped up in inclusion and false feel-good.

Bilyana Martinovski's story is uncanny and yet another example of the totalitarianism that constantly lurks in Swedish political correctness.  Note also the fear that is created that gives networks like Jagärhär so much power: As mentioned, not many hours passed from Uno Fors received Kajsa Klein's mail and to Bilyana Martinovski being fired.  And none of Bilyana Martinovski's colleagues dared come to her aid and defend her.

Let me remind you, for good measure, that the Sweden of today will become tomorrow's Denmark: all the absurd measures and attacks of grotesque political correctness that has flourished in Sweden, restricting the freedom of expression of the Swedes will, in time, also arrive in Denmark: the wave of infringement, identity politics, children's book censorship etc. It is only a matter of time before Jagärhär gets its Danish counterpart. 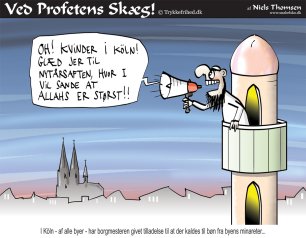